’90 Day Fiance’ Star Larissa Lima to Reappear on the Show

“90 Day Fiance” star Larissa Dos Santos Lima revealed she is still under the TLC contract and revealed to her fans in her private Instagram account that she might come back.

The 34-year-old Brazilian model was introduced to the viewers in the 90 Day Fiancé Season 6. As the viewers know, she was released from the TLC contract a year back. Las Vegas man Colt Johnson’s first wife Larissa revealed that she is getting ready to appear in the show again.

It was believed that TLC severed all ties with her after the raunchy CamS-da show; however, she claimed that she will be back soon. On Thursday, Larissa posted an Instagram story in Portuguese with a bright pink background where she revealed that TLC is not a thing of the past for her yet.

The Secret Behind the Pink Background

Immediately the grapevine got into action and that story was reposted on various social media platforms by various bloggers and fans. 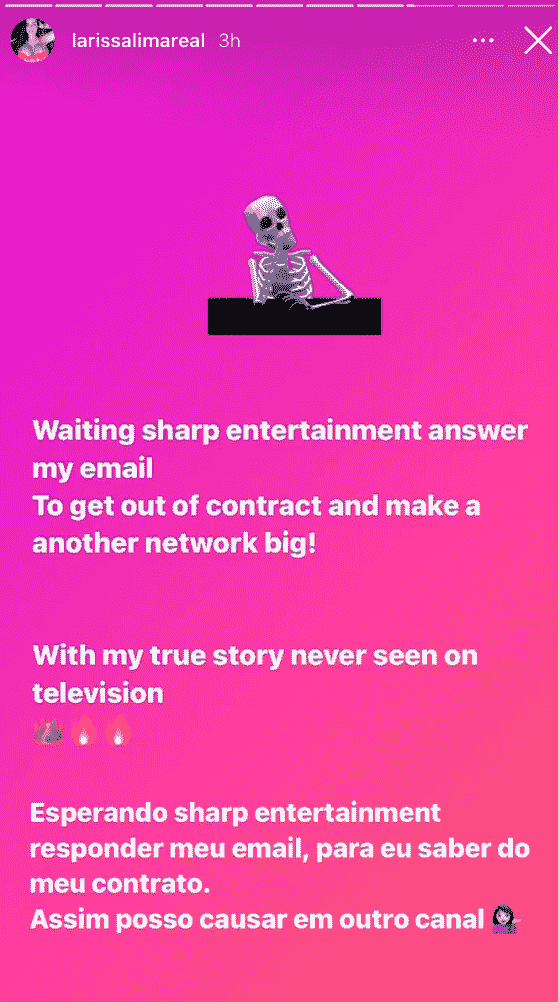 “Waiting sharp entertainment answer my email. To get out of contract and make a another network gig” was the caption of Larissa’s Instagram story.

The fans started lashing out after reading her post reposted by a blogger. “A story on how to abandon your kids and then still gain the sympathy of suckers that go to bat for you when you couldn’t do it for your kids?”

On the other hand, there were other followers who loved her, had other opinions. “She really grew on me actually. I love her now 😂.”

One fan was upset because the adult content creator had blocked her on Instagram. “the only blogger I know of that I follow is John Yates. From day one. She took an SM hiatus for her boobs and blocked a lot of her followers myself included. I dunno. It’s so strange .”

Is Eric Nichols the New Man?

The ‘body-modification addict uprooted her life from Brazil and got married to Las Vegas native Colt Johnson in June 2018, but their marriage didn’t last long. Larissa was upset with Colt and went to the extreme of putting a tracker in his car. Finally, the couple got divorced in April 2019.

The mother of two always kept her relationship with Eric Nichols private. She drew a lot of flak from the fans as it was believed that she made Eric pay for her plastic surgeries.

Larissa has two children, a son and a daughter from her previous relationships. However, she rarely discussed them on the show. She shares her son Arry with ex-boyfriend Marcos Hack.

Her ex-boyfriend Marcos took to Instagram in September 2020 and confirmed his relationship with Larissa. He wrote, “I want to address this story about Larissa and I. Yes, it is true, Larissa and I had a relationship years ago, and we had a son together. (Seven) months after he was born, she left him with me. My son Arry is the light of my life.”

As per the latest updates, the son Arry lives with Marcos’s aunt in Brazil. She attributed her inability to take care of her son to depression. Hence Marcos’ sister adopted him.

She welcomed her daughter Luane a few years later after the birth of her son. Larissa never revealed the name of the father of her daughter. “I also have a daughter, from another relationship, who lives with my father and who I plan to bring to [the] United States one day when I am ready to take care of her,”

Larissa always claimed that she loves her children, and she did not want to disrupt their lives by making them a part of the TLC reality series. According to most viewers, Larissa focuses too much on her plastic surgeries. Moreover, they believe that she doesn’t care about her children.

Most of the viewers believe that she is an irresponsible mom and got rid of her children with the slightest excuse. The fans also believe that Larissa never planned about her life properly and jumped from one relationship to the other.

She used all the men in her life and made them pay for her surgeries. She never wanted to take up a real job and take care of her children. The viewers felt that if she intended to be an adult content creator, why did she choose to become a mother?

Larissa claimed in December 2020 that she is a digital creator. In an impromptu Q&A session on her Instagram account, she revealed that her OnlyFans account has been great to her. She is making $40K per month and can afford her surgeries.

Larissa also sells merchandise on her Instagram page, and she gets a percentage of the sales through affiliate marketing.

Stay in tune with all the fresh updates about “90 Day Fiance” here. In the comments section below, please let us know if you think Larissa will be back on the show.

PrevPrevious’90 Day Fiance:’ Nicole Nafiziger Goes Back To School: ‘Been A Challenge’
Next’90 Day Fiance’ Biniyam Worried about Aierla’s Closeness with her Ex-Husband [VIDEO]Next