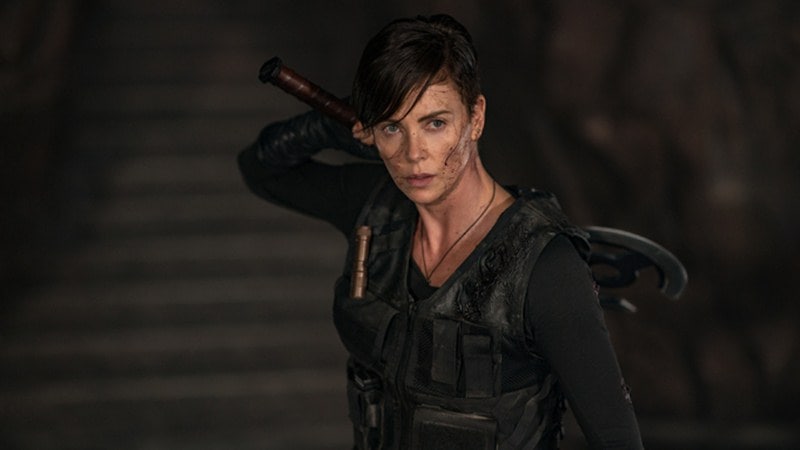 Let’s check out the most badass moments from this action film streaming on Netflix in case you haven’t checked it out yet this is your spoiler alert.

The ambush with Joe and Nikki missing Andy slaps a badly injured Booker back into consciousness knowing that cop Lee’s men aren’t done yet she heads out to deal with them single-handedly through wells.

The world we’ve made sets an exhilarating tone for the ensuing ambush as Andy drops in on the unsuspecting assailants everywhere she turns somebody is charging or shooting at her yet Andy maintains leverage throughout with a brilliant mix of gunplay and swordplay.

It’s a feat of choreography that rivals that of John wick and the matrix let’s move to wait for the signal upon receiving a not-so-subtle signal Nile begins to comprehend what Andy is capable of looking over her merciless handiwork Andy did all this herself, yeah that woman has forgotten more ways to kill those entire armies will ever learn who needs an army when you have a one-woman army in The Old Guard.

Baklava tasting an action sequence in The Old Guard doesn’t mean anything. If you don’t care about the people involved before guns begin blazing the characters here come together in a short yet sweet scene that speaks volumes about their friendship when Joe gives Andy some baklava as a present.

The guys bet on whether she can guess where it’s from able to detect each ingredient and he accurately deduces the precise provenance black sea rosewater pomegranate eastern turkey without hitting us over the head with exposition.

This scene exemplifies the camaraderie this team shares it also establishes that Andy has a lot of real-world experience which stretches back further than we initially realize in another character-driven moment we visit Andy’s old hideout and learn about her biblical relationship with Rodin this woman has lived several full lives this is an honest-to-god rodent.

Queen’s story some fates are worse than death and Queen’s backstory is a heartbreaking example, they had been alone so long she found her we need giving up Niles nightmare turns out to be the terrifying memories of a fallen immortal.

In a flashback reminiscent of old school sword & Sworcery movies like Conan the Barbarian we learn about Queen and Andy’s time together I have never been burned alive before what do you think it’s going to be like excruciating accused of witchcraft Queen Anne Andy endure unspeakable torture but they take solace in knowing they still have each other just you and me until the end that comforting sentiment is eradicated.

When Queen gets pulled away from Andy and locked in an Iron Maiden dropped into the sea Queen is forced to drown repeatedly losing her mind as the centuries passed by this sequence is like something out of a gothic horror story leaving us all with a sinking feeling.

Nile’s story one of the film’s many great character introductions we first meet the Nile while she’s serving in Afghanistan through a series of nice interactions with some local kids and women. We can tell that the Nile is a respectful marine who wants to maintain peace rather than assert Authority even when she’s given no choice but to shoot her target, Nile.

Makes an effort to bring him back alive jackpot not if he polices out they wanted him alive remember the target has a concealed knife on him however slitting Niall’s throat. The next thing the Nile knows she wakes up in a medic tent alive and confused.

Although the Nile survives her life as she knew it is overseeing her inexplicable recovery the other soldiers turn their backs on the Nile but a new family is waiting for her.

Nile solo stands convinced that she’ll never see the other immortals again Niall turns back when she notices her gun is emptily piecing together that Andy’s walking into a trap she sets out on a daring solo mission with a little assistance from Copley.

Yeah, I’m new where are the maps we can’t help but get pumped as rides up in an elevator preparing herself to either come out on top or go down fighting when she arrives on the 15th floor. The Nile takes three goons by surprise with more forces on the way.

The lab becomes a warzone with glass shattering everywhere but Niall narrowly makes it to her friends in this empowering moment Niall officially becomes part of the team while also coming into her own as an immortal soldier.

The final fight another testament to their camaraderie the gang doesn’t leave Booker behind even after he betrays them just leave although she can no longer self-heal Andy is determined for them all to walk out together.

The rousing climax is indeed a group effort with all five immortals getting their fair share of cool moments from Andy’s hallway fight with a minion to Joe’s settling the score with keen the most applause-worthy moment boils down to a standoff against Dudley Dursley.

All the lives you could save don’t you see what we could do here you are priceless armed with a gun and smelting stick there we mean battle axe Marik corners Andy and Nile luckily for them he doesn’t speak Russian fooling Marik with the old playing dead trick Nile takes him all the way down in triumphant and gnarly fashion.

The team’s purpose the immortals have saved countless lives over the centuries but even they don’t realize the full extent of their impact her grandson would save 317 people from the Khmer Rouge. In Cambodia, this member Ben did an accidental nuclear exchange in 1978 saving just one person means saving their entire bloodline she saves a life two-three generations.

Later we reap the benefits it’s revealed that the descendants of those they helped went on to make the world a more enriching place in a touching finale the team sees just how much good they’ve done while looking over copies vast collection of data which is apparently just the tip of the iceberg.

You think about I hold you up oh good you’ve done it for humanity becomes exponential with a newfound sense of purpose the team concurs there’s a lot more they can do with copy’s resources Andy is ready to get back to work immortal or not we don’t have all the answers but we do have a purpose and you’re going to help us even if her time does come soon the Nile will keep what she fought for alive.

Immortal love action movies could definitely use more LGBTQ+ representation and hopefully, this romantic scene will get the ball rolling. I believe is because we were meant to find each other the audience can tell that Joe and Nikki are destined for each other simply based on a wink that one sends the other.

The old guard digs much deeper than that small gesture giving us a fleshed-out same-gender relationship that’s rarely seen in the superhero genre. When Joe expresses concern for a wounded Nikki a soldier mockingly asks him if he’s his boyfriend only to be promptly schooled I need to know he’s okay that’s sweet what is he the boyfriend your child an infant you’re mocking is thus infantile he’s not my boyfriend.

This man is more to me than you can dream Joe delivers a monologue. So, adorning it can only be described as love in its purest form his heart overflows with the kindness of which this world is not worthy. I love this man beyond measure and reason he’s not my boyfriend he’s old and this more Nikki is so touched by Joe’s epic declaration of love that they kiss passionately even while imprisoned.

The rescue mission ten minutes in the audience may assume they’re watching a traditional action flick about a group of mercenaries. The old guard catches its viewers off-guard however when the heroes are cornered by a horde of soldiers.

The rescue mission they signed on for was a setup and the team is riddled with too many bullets to count at this moment. You’re probably thinking to yourself gee this is going to be a short movie things are just heating up though as the teams wounds miraculously heal and they spring back to life by the time soldiers realize what’s happening they’re already dead. This heart-pounding action sequence was an ingenious way to establish the main characters’ immortality showing and shooting rather than telling.

The plain fight after getting knocked out and shot in the head by Andy and Nile seemingly finds a way to escape her fellow immortal on a plane to Paris. She ties Andy up and points a gun at the pilot insisting that he’ll and we’re not going to Paris.

Although the Nile appears to have the upper hand Andy isn’t fazed and nonchalantly fires at the pilot maybe we do need a pilot this forces Nile to free Andy although it turns out the pilot was playing dead Andy’s clever gambit finally pushes the Nile over the edge it was only a matter of time until these kick-ass ladies started throwing punches at each other and this showdown proved every bit as satisfying as we imagined the claustrophobic high-altitude setting adds to the intensity of the fight making for an instant classic.