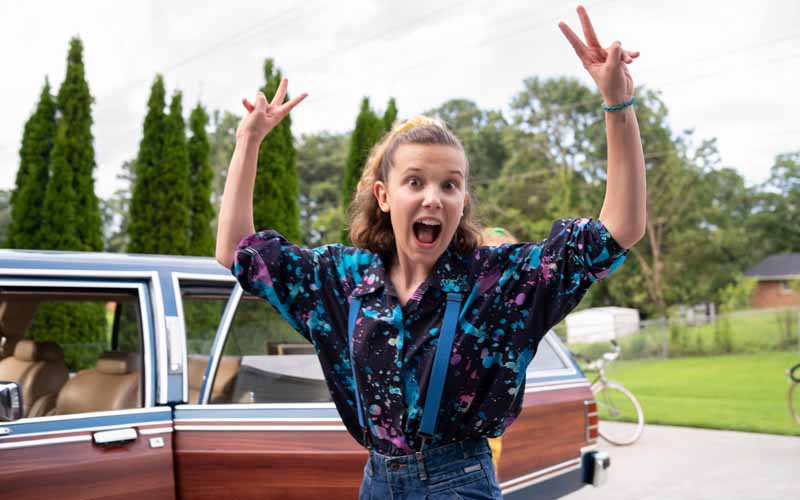 Fans were devastated when the production of the season four of Stranger Things was pushed back due to the coronavirus pandemic.

The rumor mill began churning out speculations about production restarting around this time, and much to the delight and relief of the show’s huge fanbase, it turns out that production for Stranger Things season 4 has indeed started back up. The confirmation came from Millie Bobby Brown during an interview on The Tonight Show Starring Jimmy Fallon, where she spoke about the to Stranger Things for the production of season 4.

“I guess that’s what they’re trying to say! Obviously, I just can’t wait to get back to work. I miss playing Eleven so much, Brown said in the interview. “To think, it’s been quite a while since I’ve just been on set with my friends again, and just playing Eleven, she’s always such a challenge to play, and I just miss work, to be honest with you,” she added.

Although it sounds like Millie Bobby Brown hasn’t been to the set yet, she seems to be gearing up for her reappearance as Eleven that should be just around the corner. Now that the production is ongoing, more details about Stranger Things season 4 are likely to surface online soon.

Some photos from the set have been leaked earlier. Actor David Harbour is slated to return as Hopper for the upcoming season, and the rest of the returning cast includes Noah Schnapp, Caleb McLaughlin, Gaten Matarazzo, Finn Wolfhard, and Millie Bobby Brown. Aside from that, Cara Buono, Winona Ryder, Priah Ferguson, Maya Hawke, Natalia Dyer, Joe Keery, and Sadie Sink are slated to make their returns.

Pretty sets this week. But, it is at least a good shot of a fence. Two new cast members this week. Let’s say one is Scruffy Mczskinny, and the other Dangerous MacMasterson.

Details about the release date of Stranger Things season 4 are still few and far between, but it is highly unlikely to hit soon. It could be released either next year or early 2022. We will just have to wait and see. Watch this space for more news and updates regarding the hit sci-fi horror web television series.

PrevPrevious’90 Day Fiance’ Tell-All: Jess Reveals She Got Married After Her Split From Colt
NextDwayne Johnson Drops Official Music Video For ‘Step Into A Love Like This’Next