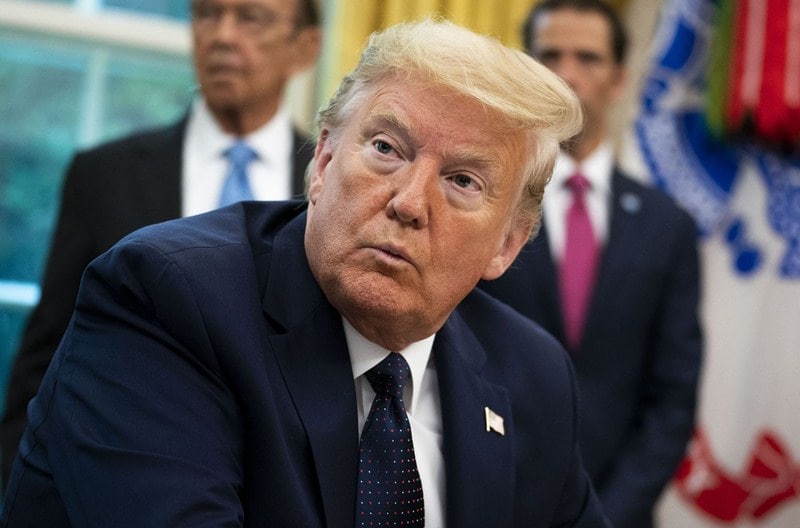 When President Donald Trump stepped out to speak in the White House Rose Garden on July 14th, 2020, a new hairdo grabbed people’s attention. The president spoke on a variety of topics, including why he believes his approach to climate change should be celebrated and why he thinks China should be blamed for the coronavirus.

Donald Trump also claimed his Democratic opponent Joe Biden would, quote, “abolish the suburbs,” a comment which caused some confusion. In what was supposed to be a news conference, the president only spent six of the 63-minute appearance taking questions from reporters.

Folks following along on social media noticed that his hair appeared grayer than usual. It should come as no surprise that he has at least some grey hair, considering he’s in his seventies, but his signature style has been one of his trademarks — the comb-over, the color, the whole look is instantly recognizable.

“It’s actually my hair, you know, I have lots of witnesses, so it is.” Author Michael Wolff discussed the president’s famous golden locks in his book Fire and Fury: Inside the Trump White House. He wrote, “The color, [Ivanka Trump] would point out to comical effect, was from a product called Just for Men — the longer it was left on, the darker it got.

RELATED: The Truth About Why Trump’s Niece Hates Him

Impatience resulted in Trump’s orange-blond hair color.” Donald Trump boasted about his look to Rolling Stone back in 2011, saying, “OK, what I do is, wash it with Head and Shoulders. I don’t dry it, though. I let it dry by itself. It takes about an hour. Yes, I do use a comb. Do I comb it forward? No, I don’t comb it forward. I actually don’t have a bad hairline. When you think about it, it’s not bad. I mean, I get a lot of credit for comb-overs. But it’s not really a comb-over. It’s sort of a little bit forward and back. I’ve combed it the same way for years. Same thing, every time.”

Trump’s noticeably grey hair during his Rose Garden address raised some eyebrows, and theories abound about the new ‘do. One Twitter use wrote: “YO I GUESS THEY STOPPED DYING TRUMPS HAIR CUZ ITS FULLY GREY NOW???? WATCH THEM TRY TO SAY HE’S GREYING FROM BEING SUCH A ‘MATURE PRESIDENT.'”

Another added, “So is NO ONE going to talk about the elephant in the room here???????? When did Trump decide to tone down the spray tan and embrace his grey hair?!” Some wonder if Trump is trying to adjust his look because 2020 is an election year or if there’s some other motive behind the eyebrow-raising adjustment. It could just be that the president ran out of Just for Men.

One theory suggests the president may be trying to look like his challenger. One Twitter user said, “I feel like, in regards to Trump’s suddenly grey hair, that he knows he probably can’t beat Biden so he’s now trying to emulate him..? The mask, the grey hair, etc.

I’m just waiting for the aviators next. He truly doesn’t understand why Biden is so ahead in the polls.” One of the more entertaining possibilities ties back to American history, as some experts believe the New York native has taken a page out of George Washington’s playbook.

Historian Alexis Coe, author of The New York Times bestseller You Never Forget Your First: A Biography of George Washington, spoke to Vogue in March 2020 about how Trump’s greying hair is reminiscent of the first president’s locks during hard times. She explained, “What I think might be happening is a kind of manipulation of the American public in which he is attempting to show citizens that he is suffering as well.”

Coe also noted how Washington highlighted his aging at the end of the Revolutionary War in 1783. In a speech at the time, he said, “Gentlemen, you must pardon me, for I have grown not only gray but blind in the service of my country.”

Coe acknowledged that this theory seems somewhat unlikely since the president seems to show little interest in American history. Whatever the reason, everybody knows Trump keeps close tabs on Twitter, so he’ll likely address all those tweets about his tresses soon enough.