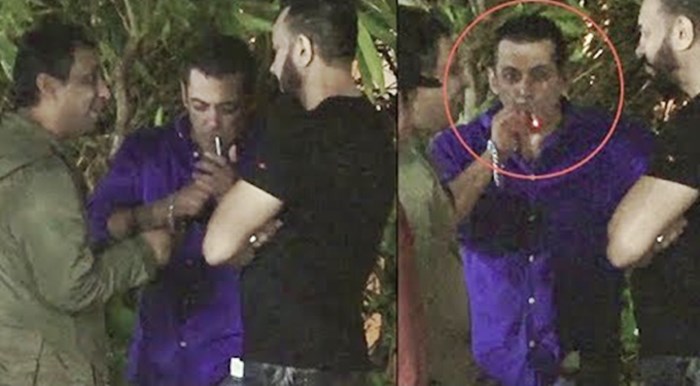 Well known Bollywood big names have consistently been under severe media examination and public eye, which accompanies a lot of upsides and downsides.

As of late, a video of Salman Khan, in which the actor is seen smoking a cigarette on the sideline of a Ganpati Utsav, which has turned into a web sensation via social media and has pulled in a great deal of criticism for him.

Aprita, Salman’s sister hosted the Ganpati celebrations in which the actor participated. The actor was praised for dancing his heart out as usual during the celebrations but later went separate from the family to smoke while the celebrations were going on.

Salman’s enthusiasm is always appreciated by his fans all over India, though this is the first time the actor has become center of criticism for all the wrong reasons as fans are pretty much upset.

The smoking video surfaced the social media in which Atul Agnihotri (filmmaker friend) and Salman Khan can be seen smoking together.

Check out the viral video below of Salman smoking at Ganpati Utsav here:

Disclaimer: Smoking is injurious to health. Katrina Kaif with Ranbir Kapoor on the sets of Tamasha Like they say, smoking is injurious to your health (and reputation), especially, if you are a controversy-plagued actor like Salman.